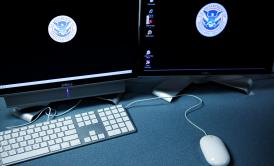 The logos of the U.S. Department of Homeland Security are seen on computer terminals in a training room of the Cyber Crimes Center of U.S. Immigration and Customs Enforcement Oct. 13, 2009, in Fairfax, Va.

The new report looked into the work of so-called “fusion centers.” The centers are supposed to coordinate the sharing of intelligence between local, state, and federal law enforcement and counterterrorism officials. But here’s how the report from the Senate Homeland Security and Governmental Affairs Permanent Subcommittee on Investigations describes them (the full report is available at Government Executive):
“The Subcommittee investigation found that DHS-assigned detailees to the fusion centers forwarded ‘intelligence’ of uneven quality – oftentimes shoddy, rarely timely, sometimes endangering citizens’ civil liberties and Privacy Act protections, occasionally taken from already-published public sources, and more often than not unrelated to terrorism.”

Congressional investigators also found that the DHS made misleading public claims about the centers, for example, insisting that “some fusion centers existed when they did not.” The DHS is further criticized for possibly violating its own guidelines when collecting and storing information on American citizens, possibly violating the Privacy Act. We won’t even get into the apparent “must-have” intelligence purchases, which included “dozens of flat-screen TVs,” and an SUV used by a city official as a commuter vehicle.

The New York Times points out that the fusion center—supported publicly by both the George W. Bush and Obama administrations—are actually pretty redundant, as local and state law enforcement already had set up “Joint Terrorism Task Forces, with the federal government to coordinate on terrorism-related criminal investigations.

The report, worth a scan for its down-the-rabbit-hole narrative, also examines three high-profile instances in which fusion centers provided useless or inaccurate intelligence information, including erroneous information on Gabby Giffords’ shooter Jared Loughner.