Re: the Book: “BRIGHT LIGHT ON BLACK SHADOWS” by the late Rauni KIlde, MD. (The book is already translated into Polish and available on eBay (ask DR.RAUNI KILDE) as JASNE SWIATLO W CIEMNOSCI TUNELU. 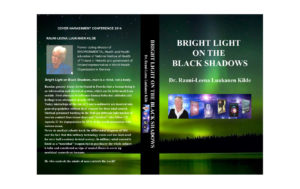 After the actions of “Stay Behind”* (Armies, such as Operation Gladio in Italy), badly hurt TIs – Targeted Individuals – are then controlled by NGOs (non-governmental organizations) which, in reality, are CBA – Community Based Agents. TIs try to get help, join organizations, attend conferences and join various email threads, fora, etc. There, they report to others about their suffering. This information is gathered and passed by NGOs to the oppressors- the “Stay Behind” Armies- who then can learn if their programs are adequate to their task. These NGOs are also spreading disinformation, false rumors, malicious lies to the public to discredit Targets and and those who try to help TIs.

This happened to me as the publisher of Dr. Rauni Kilde’s book. All bookstores, couriers, and other people refused to sell or service the book. Amazon.com (in reality a CBA), since the beginning of February 1, 2016, is sabotaging and blocking the sale of this book; and on websites other than Amazon.com, the buyer is getting disinformation that there are no books in stock, when, in fact, I still deliver to anybody around the world.

Readers can find out in this book the answers to who organized the terrorist “Stay Behind*” armies in Europe (ETK note: CIA, MI6, and NATO): particularly in Paris where martial law still exists. See chapter 18 in Kilde’s book, entitled: “Overview of harassment methods by covert community recruits (COINTELPRO, Gladio, Stay-behind).”

* NATO, the house of “Stay Behind & Gladio”- Oppressors of TIs

How to survive attacks of oppressors.

There is no other real source of reliable and complete information than the book of Dr. Rauni Kilde. In accordance to two following statements the only way to protect yourself against the military secret technology being used is the knowledge about it and that our human energy is stronger than any other that is artificially created by our oppressors.

… “MKULTRA was approved by the DCI [Director of Central Intelligence] on April 13, 1953 along the lines proposed by ADDP [Associate Deputy Director for Plans] Richard Helms.

… Over the ten+-year life of the program, many ‘additional avenues to the control of human behavior’ were designated as appropriate for investigation under the MKULTRA charter. These include ‘radiation, electroshock, various fields of psychology, psychiatry, sociology, and anthropology, graphology, harassment substances, and paramilitary devices and materials.’

… LSD was one of the materials tested in the MKULTRA program. The final phase of LSD testing involved surreptitious administration to unwitting non-volunteer subjects in normal life settings by undercover officers of the Bureau of Narcotics acting for the CIA. The rationale for such testing was ‘that testing of materials under accepted scientific procedures fails to disclose the full pattern of reactions and attributions that may occur in operational situations.’ Page 157 [Inspector General Report on MKULTRA, 1963, p. 21 ]

‘While I share your uneasiness and distaste for any program which tends to intrude upon an individual’s private and legal prerogatives, I believe it is necessary that the Agency maintain a central role in this activity, keep current on enemy capabilities the manipulation of human behavior, and maintain an offensive capability.’

… On December 17, 1963, Deputy Director for Plans Helms wrote a memo to the DDCI, who with the Inspector General and the Executive Director-Comptroller had opposed the covert testing. He noted two aspects of the problem:

(1) ‘for over a decade the Clandestine Services have had the mission of maintaining a capability for influencing human behavior;’ and
(2) ‘testing arrangements in furtherance of this mission should be as operationally realistic and yet as controllable as possible.’

Helms argued that the individuals must be‘unwitting’ as this was ‘the only realistic method of maintaining the capability, considering the intended operational use of materials, to influence human behavior as the operational targets will certainly be unwitting. Should the subjects of the testing not be unwitting, the program would only be ‘pro forma’ resulting in a ‘false sense of accomplishment and readiness.’’

[Memorandum for the Record prepared by the Inspector General, 5/15/63]

… Helms noted that because of the suspension of covert testing, the Agency’s‘ positive operational capability to use drugs is diminishing, owing to a lack of realistic testing. With increasing knowledge of the state of the art, we are less capable of staying up with Soviet advances in this field.’

Project MKULTRA, the CIA’s Program of Behavior Modification, Appendix A, XVII. Testing And Use Of Chemical And Biological Agents By The Intelligence Community, Joint Hearing before the Select Committee on Intelligence, U.S. Senate, 95th Congress, 1977 (Page 159)

source : The Book pages 157,158, 159 and from: Freedom From Covert Harassment and Surveillance

Two months before her death, she ended her last lecture with these words:

“We are alone. Nobody will help us. There are no doctors, no police, no governments for us. Only our own human energy will save us. Our energy is stronger than any artificially created by “Stay Behind.”

How to buy the book

The book is the manual and surviving kit for people in the XXI century. It teaches you how to read media, save you from visiting doctors’ offices, helps you to avoid killer–vaccines, and protects you against most of military’s secret technologies. This monster is not stopping it’s activities. Right now, since 2014, “Stay Behind” has introduced its technologies in Eastern Europe in Poland under the authority of the Ministry of Education. Since then, hundreds of victims in the civilian population in Poland have become TIs. Most of these are single young woman. I personally know two persons who are being attacked by the system in Poland. One of them complained to the Prosecutor. The Prosecutor, acting as a CBA (Community-Based Agent), filed the case in the court charging her for harassment of the prosecutor’s office with the suggestion to eliminate her from public life and put her in a mental hospital.

You can buy the book, “BRIGHT LIGHT ON BLACK SHADOWS,” from Amazon.ca – BUT NOT FROM OTHER SITES. The best option, and a little bit cheaper (I pay shipment – ca $20.00 CAD), is to buy the book directly from the Publisher: Bohdan Szewczyk, 14 Arletta Street, Georgetown, L7G 3J3, Ontario, Canada, 905-873-0961. To keep your privacy, you can give me a different address than yours where I can send the book.

“So I have come to the conclusion that since Finland is not in NATO, which secretly requires the presence of ‘Stay Behind’ armies in NATO countries, we have been saved from a lot of “grass root criminality” against our population. Besides, as of 1990, the EU Parliament has already forbidden ‘Stay Behind’ organizations which for decades have escaped all democratic controls and have been run by secret services in collaboration with NATO. In certain member states, military secret services (or uncontrolled branches of it) were involved in serious cases of terrorism and crime, evidenced by various judicial inquires. These organizations continue to operate outside the law and are not subject to any parliamentary control and frequently those holding the highest government and constitutional posts are kept in the dark as to these matters. European Parliament condemned the clandestine creation of these manipulative and operational networks. Probably, therefore Finland’s new military commander, Ari Puheloinen, said recently publicly that “we don’t have finances” to a fund a new organization. We certainly don’t need a grass roots criminal group like in Norway attacking the civilian population in peacetime. (from Chapter XIX of BRIGHT LIGHT ON THE BLACK SHADOWS the book of late Rauni Luukanen Kilde MD)