“Judaism is a secret Satanic cult posing as a religion…. Judaism is not Monotheistic but Luciferian. Its goal is the replacement of God with the secret Jewish leadership. Both the Talmud and the Cabala are dedicated to the proposition that only Jews are human…. Modern history and culture reflect a Cabalistic (Satanic) spell cast on the human race. It is dedicated to the fulfillment of prophecy, the eventual enslavement of mankind by the “Jews” who in practice will be the crazed Illuminati Order.”

“You have not begun to appreciate the real depth of our guilt. We are intruders. We are disturbers. We are subverters. We have taken your natural world, your ideals, your destiny, and played havoc with them. We have been at the bottom of not merely the latest Great War but of nearly all your wars, not only of the Russian but of every other major revolution in your history. We have brought discord and confusion and frustration into your personal and public life. We are still doing it.” 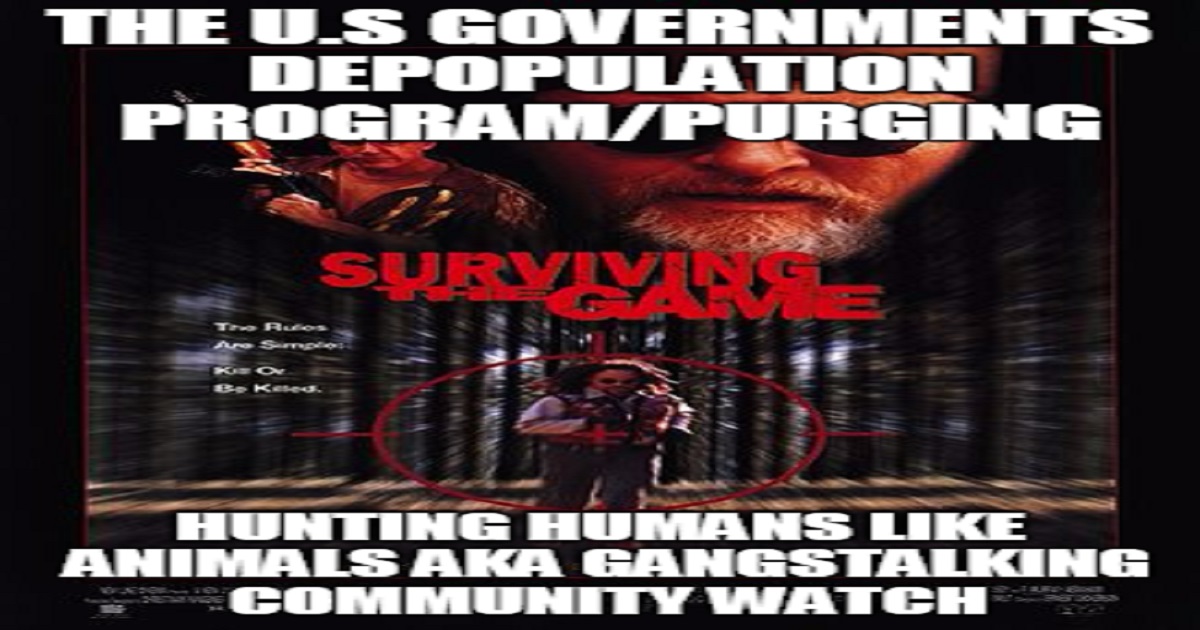 Webmaster Comment: After discovering the above graphic, I located the 1994 movie entitled “Surviving the Game,” which clearly depicts a hunger-games type society where people kill other people for sport. Is it coincidence that this movie came out the same year that the U.S. Department of Defense (DOD) proposed that “”non-lethal weapons” be used against anyone engaged in activities that DOD opposed?” OR, rather, is this a case of social conditioning and predictive programming to prepare the public to accept and participate in staged “blood games” aka “ganstalking” to eradicate opponents to the New World Order, neutralize “truth-tellers,” stimulate the economy, and reduce the population. My term for this “program” is “G5” for “Global Government Gangstalking Genocide Gestapo”

From Dr. Rauni Kilde’s Warning To Humanity (From “Bright Light on Black Shadows, 2015)
”
… “The elite have plans to get rid of 2/3 of the world’s population with electromagnetic warfare, chemical warfare, and psychological warfare…….

On July 21, 1994, the U.S. Department of Defense (DOD) proposed that “non-lethal” weapons be used against anyone engaged in activities that DOD opposed. That could include almost anyone. DOD’s potential enemies may be counter-cultural individuals, those with opposing political viewpoints, economic competitors, biological undesirables, etc. From my point of view, the uses of this new technology philosophically are comparable to and amount to the Biblical Fall of man, the eviction from paradise. The all-encompassing thought-reading and mind-influencing capacity (of this technology) divides man into two encampments: Those few “God-like” people, who are allowed to use these means, and all others, whose freedom and free will is being taken away.

We have been very surprised to hear about school and shopping center shootings. How many realize that these are tests where mind control programming is used to create a human robot. The serial killer is a victim himself, being programmed to be an emotionless robot and following orders to kill. The real killers sit behind computers and send him electromagnetic beams to the brain.

…. the secret services and their sabotage and terror “departments” are the biggest “terrorists” in the world and work together with the mafia. That was the case even in World War II, as has been published decades ago…. More crimes against humanity have been committed under the shield of “national security” than the people can ever know…. possibly even more than the mafia.

…To label the (non-consensual) human experimentees, the victims of mind control, as paranoid-schizophrenic is a crime against humanity…”

Given the near complete control over Hollywood by Jews, the CIA, and the Pentagon (DOD), I believe it is not a coincidence that the DOD mandate to use non-lethal weapons against its enemies and “Surviving the Game” came out in the same year. And this movie was followed with a series of movies that depict “gangstalking”-type operations, including “The Game” (1997), “Enemy of the State” (1998), “The Truman Show” (1998), the Jason Bourne Movies (2002, 2004, 2007, 2012, 2016), “The Lives of Others” (2006), “The Hunger Games” (2012), “Murder on the Orient Express (2017)” and others which also give fairly close depictions of gangtalking-type operations and normalize operations in which society itself is used to kill individuals. Again, these movies help condition the public to accept and participate in these blood games. Thus, it’s all hidden in plain sight.

These developments coincide with a society which has been psychopathized, that is, turned into a psychopath. The book “Political Ponerology: A Science on the Nature of Evil Adjusted for Political Purposes” by Andrew M. Lobaczewski (2012) discusses this process in sociological terms as applied to communist nations during the 20th century.

Are we as individuals buying in to these Luciferic, Judeo-Masonic-Pentagon-CIA blood sacrifices? Certainly the society has bought into the phony “War on Terrorism” and the more recent “Bio-Security” narratives and the national security racketeering network is making a fortune!

In “The Hidden Evil, The Financial Elite’s Covert War on the Civilian Population,” Mark M. Rich notes that “the program” is a “very cleverly disguised program of torture and murder.” Without question, this soft-kill, slow-kill, silent-kill, no-touch torture program amounts to murder and highest treason. It is also ritual human sacrifice and part and parcel of the elite’s long-sought depopulation purge.

Surviving the Game: Where the Thrill is the Kill (1994)

By “normalizing” group murder of individuals thought to pose a threat to the elite power structure, our psychopathic-predator rulers have satanized our nation. Our nation and world have descended into pure evil. With the Covid “vaccines” this track and trace active surveillance program will radically expand.

Increasingly, it seems most likely to this observer that our self-designated rulers are not human per se. As psychopaths, they comprise a completely different and extremely dangerous species.