UNLast week (Sep 29), the Department of Justice made an announcement at the UN that sent ripples across the Net, particularly after Kris Anne Hall‘s video drawing attention to it, about a new “Strong Cities Network” comprised of a partnership between police forces in cities and counties in the US and the UN, to create a “Global Police Force” initiative. The rhetoric from Justice mentions the need “to counter violent extremism” several times, although it does not specify who these violent extremists may be.

Please note the title to the press release from DOJ: Launch of Strong Cities Network to Strengthen Community Resilience Against Violent Extremism

Excerpt: “The Strong Cities Network will serve as a vital tool to strengthen capacity-building and improve collaboration,” said Attorney General Loretta E. Lynch. “As we continue to counter a range of domestic and global terror threats, this innovative platform will enable cities to learn from one another, to develop best practices and to build social cohesion and community resilience here at home and around the world.” Read the whole memo at the DOJ’s website here.

This does seem most definitely like a step in establishing the supremacy of the UN’s Agenda 21 on American soil, as Kris Anne Hall spells out. When local police are seen, not as local police, and not even merely as overbearing arms of a Federal mechanism, but as arms of the UN acting locally in our neighborhoods out of globalist agendas of countering “extremism” — such as what, I wonder: expressing opposition to corporate globalist agendas? expressing interest in such passe notions as free speech, freedom, sovereignty? expressing allegiance to local business, local autonomy, and local community? — we are no longer speaking of national sovereignty.

Under what kind of “extremist” circumstances would we need to trade our local friendly neighborhood cop (yes, you can coat that with some irony–we’ve already lost that) for a non-local “global” enforcer of what exactly–global laws? Is this the beginning of setting enforcement mechanisms in place, for instance, to move cities and counties away, maybe, from the various freedoms of backyard vegetable gardens and collecting spring water at a local park to a policed, corporate system of food production and appropriation of water ownership? As many bloggers and analysts have pointed out–just Google “strong cities network”–this is absolutely a marker of a turning-point for America and not only do we need to be aware of it, we need to figure out how to counter it. In just such minuscule ways could a whole country be lost.

Kris Anne Hall’s analysis can be heard here–she also has a Youtube channel and posts regularly:

If you are so moved, please contact your representatives here and speak out against this takeover of local law, or write a letter to the editor of your local paper. 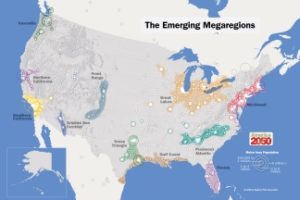 2050Then there’s the whole America 2050 Mega Regions initiative, and many analysts tell us this too is being frantically pushed by Agenda 21/2030 urban planners. If you look at the America 2050 website, it barely looks current, but look for videos on Youtube, several dedicated reporters are covering this subject, including Grindall61, UN Smart Greed Agenda, and others. What is happening now is meetings are being held at the city and county levels, meetings where planners and managers are describing mega regions and “smart” cities, which really mean public transportation, stacked housing, and confinement within discrete areas where employment, recreation, and leisure will all be moved both into tiny spaces and technologically-inscribed spaces.

Screen capture on Oculus TV segment from the video by Grindall61 below
There is no doubt that there is a concerted, managed, top-down rollout of these plans, they are being “presented” quite transparently as attractive options in what is being glibly imagined as an impoverished future, where pollution, carbon emissions from cars, and unbearable commutes will lead naturally to people wanting to live one on top of the other, work on the ground floor, a cafe round the corner, and Google Glass or Oculus–a virtual reality Blinder that will tie you to your technology even tighter than your iPhone or iPad–happy to create an all-around virtual experience for you, from socializing to virtual visits to museums, parks, and even television studios–oh what joy! (Fresh air, you say? What fresh air? You won’t need any! There’ll probably be piped-in air in your cube housing that you will of course be paying for, and why walk about in Nature when Nature can be bound with steel to your forehead? Besides, you can’t get out of the Smart City anyway, those Wildlands are probably being reserved for the new genetically-modified animals of the future!) 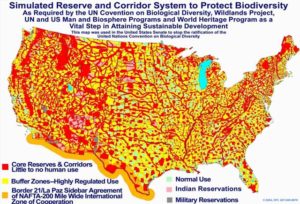 Wildlands Map from StoptheCrime.Net (click on image to view larger version)
Take a listen to the all-encompassing condescension of this presenter, presumably at a University setting in California, and watch the not-to-be-missed spliced-in TV introduction to the Oculus blinders–this is a video put together by Grindall61:

I’m all for public transportation in cities and elsewhere myself, but I too can sense and see there is something rabidly wrong in top-down planning that seeks to forcibly oust people from their homes,wherever they may be, whether in the suburbs or the country, transplant them to very built-up cities, and force public transportation, along with stacked housing on them/us. What will happen to the suburbs–and all our houses in the burbs? (No worries, they’ll be property of the State soon enough. Meaning the UN, probably.)

Brief video of concerned presenters and planners wanting to get you out of your car for good, also from Grindall61:

There are other videos that go into this subject in greater depth such as this one.

Please visit Sofia Smallstorm‘s blog and listen to this very interesting conversation with activist Anita Whitney, on how Agenda 21 funding is shaping and reshaping our city and county councils and governments, all of whom are actually not government but corporate entities. The podcast is dated 7/15/15. Anita Whitney details what ICLEI is, and how they have taken over local governments.

green maskRosa Koire mentions in this July 18 Infowars conversation that people across the US in different counties and cities from New Hampshire to Alabama are pushing back and making progress in keeping the Smart City, Smart Growth Mega Regions initiatives out of their locales. But it really does need some legwork, you have to go to those council meetings and listen in and speak out. You could also research further to expose what’s going on and who is involved.

On her website, in addition to information, she lists various actions one can take, the names of various organizations, foundations, groups associated with and funding the Agenda 21 rollout, and she offers flyers for use in informing neighbors and communities.

The media clearly isn’t reporting any UN Agenda 21 rollouts, all this is being rolled in rather through the back door. Please keep following reports on Youtube and in alternative media. While it may be hard to figure out what exactly to do, we do have some options, and Rose Koire’s website covers several. If we do nothing, we just may be steamrolled into this dystopian future of mass control and surveillance we surely don’t want, not for us, nor our children.

Rosa Koire Spells it Out: Agenda 21/Agenda 2030 is the Blueprint for High-Tech Concentration Camps of the Future

Michael Snyder/The Economic Collapse Blog: The 2030 Agenda: This Month The UN Launches A Blueprint For A New World Order With The Help Of The Pope