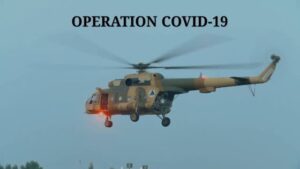 Corbett: “This agenda is really about the total and complete control over every aspect of every human being on the planet, their movement, their actions, their activities, their transactions, their interactions with people down to the individual level, the complete and utter control of your life in every regard. Guess what? That is being enabled on the back of this pandemic scare.

With over half of humanity now on some form of lockdown, curfew, social isolation, self-quarantine order or request, things are getting very, very serious. This is the fulfillment of the globalists’ plans for decades or generations. The(re) is growing technocratic and surveillance control over every aspect of your life. The trap has been set, the bait is already in the trap, and the trap is already starting to spring. Can we move out of the way in time?

This is about authoritarian, totalitarian, collectivist control over all of humanity. If we do not understand that is the problem that we are facing then how can we ever possibly understand the real solutions? So I hope you understand the gravity of the situation that we are facing. This is the game for all the marbles and it is being played right now. Are you a player or are you just going to watch from the sidelines? Because if you are, you are definitely not going to win the game.

II. Interview: In Case You Haven’t Noticed, This Is A Bolshevist Takeover West Wide March 23, 2020

Interview: In Case You Haven’t Noticed, This Is A Bolshevist Takeover West Wide (March 23, 2020)

Iraqi political analyst Muhammad Sadeq Al-Hashemi said in a February 26, 2020 interview on Al-Ayam TV (Iraq) that in the 1981 thriller novel titled The Eyes of Darkness, American author Dean Koontz had written about the coronavirus. Al-Hashemi argued that this proves that coronavirus is an American plot and he said that the goal of the plot is to reduce the world’s population. He said that in the past 10 years, two patents have been filed in the United States for the development of virus strains with the name “corona” and he compared this American “conspiracy” to when the Jews used blankets infected with anthrax to wipe out 86% of the native population in what is today the United States in order to have a real Jewish homeland. He said that the Zionist lobby similarly cleansed one third of the population of Scotland and that the Rothschild family has a monopoly of laboratories that develop biological and nuclear weapons. Al-Hashemi added that the Rothschilds had been the ones who decided to use nuclear weapons on Hiroshima and Nagasaki in 1945.

Muhammad Sadeq Al-Hashemi: “What proves that [the coronavirus] is American-made and an American plot is that there is a book called Darkness Dwellers [i.e. The Eyes of Darkness] written by Dean Koontz in 1981, 40 years ago. Forty years ago, he already wrote about the coronavirus appearing in Wuhan. He gave [the virus] the same name, only adding ‘400.’ The ‘400’ is a riddle I couldn’t solve. It’s called Corona-400 [in the book]. Before 2015, and also in 2018, two patents were issued in the U.S. to develop a strain of viruses under the same name.”

Muhammad Sadeq Al-Hashemi: ” Yes, corona. The patent is registered in the U.S., with a number and with a date.

“The most prominent American economists talk about the need to reduce the world’s population.”

Muhammad Sadeq Al-Hashemi: “So how can I think well of the U.S., and reject conspiracy theories, when the U.S. is acting in keeping with them? If we study [American] political history, it is based entirely on conspiracies. In order to take root in what is today the United States… America was a British colony, and the Jews planned to cleanse the two Americas, so that they would become the real Jewish homeland, before Israel [was established]. So they spread anthrax through blankets. They annihilated 86% of the population of the U.S. with anthrax. The Zionist lobby used this against the Scottish people, thus killing one third of the population of Scotland. It was also America that put an end to WWII, following a Zionist decision. The decision was taken by the House of Rothschild. The world must speak about the Rothschild family…”

Interviewer: “Yes, it is a rich Jewish family…”

Muhammad Sadeq Al-Hashemi: “[The Rothschild family] finances and has a monopoly on laboratories that develop biological and nuclear weapons. [The Rothschilds] decided to end [WWII] and financed the attack on Hiroshima and Nagasaki.

One Reply to “WHAT’S HAPPENING? 1) “CORONAVIRUS WORLD ORDER,” 2) “BOLSHEVIST TAKEOVER,” 3) “SETTING AMERICA UP FOR PASSOVER RITUAL,” 4) “AMERICAN-JEWISH PLOT TO REDUCE WORLD POPULATION?” or 5) ALL OF THE ABOVE (4 Videos)”