Webmaster Comment: Fantastic summary! Sounds about right to me. Excellent flow charts! No wonder we Targeted Individuals cannot get justice. This is the system that rules the world. Suzie, the video maker from New Zealand, calls the NSA’s “Global Spy Network” the “transnational military dictatorship.” The only “correction” I’d suggest is that Fusion Centers were used during the Vietnam War under the CIA’s Phoenix Program. These were actually “enhanced interrogation”/torture/murder centers. See Douglas Valentine’s books, The Phoenix Program (1990) and The CIA As Organized Crime: How Secret Operations Corrupt America and the World (2017).

It is interesting to note that we “TIs” are considered “security risks” by the global dictators. It does appear that the U.S. government, as controlled by the US military and intelligence agencies, is indeed “The Great Satan.”

Flow Chart From video and “I Spy With My Little Eye” by Suzie Dawson. 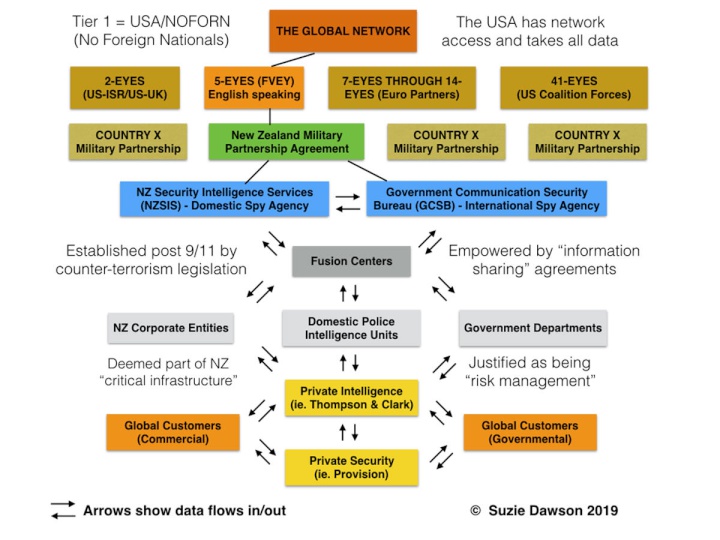 Suzi 3D
This is vital information: Suzie visually maps out the “intelligence empire” run by the NSA and explains it in an easy-to-understand way.

With her #1vs5i​ movement, courageous Kiwi journalist Suzie Dawson is laying down some serious truth, and building a platform where we can work together to bring unlawful state targeting of citizens to an end.

The #1vs5i​ campaign is a groundbreaking crowd-sourced effort to fight back against the crimes of the “Five Eyes” Western intelligence agencies. PLEASE DONATE to support Suzie’s fight for justice and accountability at this link: https://1vs5i.com/donate​

sam phi
1 year ago
Excellent presentation Suzi. Easy for everybody to get a grasp of. It shows why so few campaign promises are kept. Even the politicians are treated as useful idiots. It doesn’t mean they can’t show some balls though, despite being weighed down by treaties etc.. that were signed before they assumed office.

Aurinkohirvi
1 year ago (edited)
Aha, that’s a good flow chart. Cleared the picture. Never heard of these other eye-groups except the 5.

The Biblical Rumble Room
1 month ago
Great work Suzie. Thanks so much and hang in there friend.

Jeanne Jackson
1 year ago
oould you show the 2 charts with the green background, can’t find it again

Tim Williams
1 year ago
3:43 Suzi, this is a very informative video – thank you. Can you read what they did to me and tell me who was behind it? http://www.godelectric.org/christchurch-man-made-earthquakes#true-story

I assume it was the US with a totally corrupted element working with banksters overseeing the man made eqs in NZ ? How can i find out which private company it was that targeted me?

Michelle Spiritual
1 year ago
Thank you for your hard work Suzi.

Where did you come up with the idea that it’s not the gov’t, but the military?

To me, that’s one in the same really.

Mary Ann
2 weeks ago
They could even have programs called “a trillion eyes” – we the people are winning nonetheless. 🙂 #PrepareForChange #WeThePeople #FightBack #TruthWins #JusticeIsComing #SaveTheChildren #SaveHumanity

Patricia Dolan
1 year ago
I’m pretty sure I was targeted today, I saw it coming but today was obvious. I knew viscerally that something was off. How “coincidental” that I should see this tonight. Thank you Suzi………I’ve been watching Katherine Horton for about a year now.

wwwtotalitaerde
1 year ago
You missed the key point to understanding.
These methods were already used before ww1 here in Germany.
They were perfected during the nazi time.
After ww2 organized the repressive system in many countries around the world.
The idea to get the british empire into this system was already promoted by Hans Dominik in his novel “Befehl aus dem Dunkel ” published in 1932/33.

cathyx
1 year ago
How do we defeat this network?

George
1 year ago
So in effect, there’s little chance that a society under this network, will be shaped by the will of the electorate.
Nice way to subvert a democracy.

victrola13
1 year ago
9/11 truth would END ALL this SHITE tomorrow.

Doctor Dorkmeister
1 year ago
I 💗 Suzi