Generation of Ultrasound based on the frequency response characteristics of the ‘Koss Pro Headphone’ with R. David Case Sound wave files’ – A Case study (pdf)

Generation of Ultrasound based on the frequency response characteristics of the ‘Koss Pro Headphone’ with R. David Case Sound wave files’ – A Case study

Dave Case, Engineer in Missouri, obtained degree in Electrical Engineering at age 20. He invented an electronic levitator, and a light-operated computer. When he tried to patent it in 1996, he was attacked with sonic weapon tinnitus. He was then tortured electronically for 3 years. So he asked God for help…. as electrical engineer/inventor, he wired two 555 oscillators together and put the sounds on headphones and found that it knocked out the sonic weapon tinnitus. In 2000, he has put this sound on CDs and given them to Tis. His “anti-tinnitus” jamming CD has helped over 1000 Tis overcome their targeting.

This CD jams V2K. A neuroscientist in the UK found that when used with Koss headphones, the CD puts out 2.8 MHz of ultrasonics. And that is what is interfering with V2K and the targeting equipment. So it jams or interferes with equipment they are using. It knocks out a bio-relevant feedback loop. They use this to target and track TIs. The jammer CD interferes with that equipment.

Dave Case did not have V2K, but just the sonic weapon tinnitus…. A very loud shrieking, screeching sound. His CD stops the V2K voices as well as tinnitus. It also stops electronic attacks because it disrupts the bio-relevant feedback loop. This is required for the perps to keep using remote neural monitoring. This system reads and tracks your bio systems.

These are military technologies that are classified and almost impossible to detect and prove. Military grade spectrum analyzers are very hard to ID with standard equipment.

The equipment is extremely hard to trace and essentially leaves no evidence. It’s very hard to prove what is happening. Once the energy hits the skull, the moisture in the skin expands and contacts so fast it causes sounds. These sounds will cavitate like hydraulic cavitation. And this can cause brain damage.

The amount of time needed to use the CD varies depending on how long people have been targeted. The night time is when they tinker the most with your brain- during alpha wave state…. So it is important to use the CD at night to protect your brain.

Bone-conduction headphones don’t work as well as the Koss KTX-Pro-1 headphones. These set up an ultra-high oscillation (2.8 MHz). This is a healing frequency. Play the CD on low to medium. Use repeat all function to play it all night.

This works best. The coils in the Koss headphones have titanium drivers. These cause the ultra high ultrasonics that interfere with the equipment. We’ve tested many headphones.

Neuro-plasticity is an emerging field in the medical profession. Sound is going to be the new medicine in the coming years.

Neurophone was invented by a 14-year old in 1959. It communicates directly to nerves without using the ears.

Navy SEALS can use these kinds of technologies to see behind their heads…. There are many ways to deliver these voices and systems.

We are involved in a psychotronic war. Morality is the last thing on their minds.

And yes, there are powerful people and families that also have access to these technologies.

The first IC chip came out in 1965. The CIA came out of a closed meeting on this and announced the transistors on the IC chip are not just switches, but part of subsystems. So the CIA is in bed with all chip manufactures. So your DVD player is not just a DVD player…. Your cell phone is not just a cell phone… all are readable by the CIA, etc.

Cuban diplomats were hit by RF in 2017. But actually, diplomats in the American Embassy in Moscow were also hit by EMFs between the 1950s and 80s. They found that the building was surrounded by antennas in other buildings. The frequencies caused emotional distress. Indeed, they had to tear down embassy. Our government found the equipment and then told the employees they would get hazard pay to keep working. All navy ships and bases have 100 times the EMF levels that caused the diplomats to cry.

The CD is jamming the bio-relevant feedback loop. Once they do the RNM (remote neural monitoring), they can do many things. Once their data is not being received the whole thing starts to shut down.

The device they are using for all of this is SQUIDD- Superconducting Quantum Interference Detection Device) which essentially is an MRI (magnetic resonance imaging). I believe they have these in satellites. They have put a grid all over the earth and as you walk you are walking from one grid to the next. They are tracking everything by reading your bio-systems. They are doing long distance remote neural monitoring of people from satellites.

Q: Is this technology now being tested or is it now being deployed?

Case: I believe they have the ability to read the bio systems and track every person on earth. The GPS satellite system surrounds the entire earth. I believe this was the main purpose for putting it up. This is a military weapon. The second purpose was to locate places on the earth (the commercial GoogleEarth capabilities).

Or is it possession by evil? People are pawns to this.

They can put any sound they want into the skull. These are all experiments to see how people react to electronic stimuli. Cell phones are one of the biggest mind control devices. They have actually learned how to reverse people’s decisions while they are making them by putting buzzing and beeping sounds on cell phones.

This process can be described as “cyberbullying in person” and doing this remotely gives psychological thrills to some people.

Case: Governments can’t use electromagnetic weapons on their own people. That is treason.

A CME (Coronal Mass Ejection) from the sun can and will knock these systems out at some point. So every country is preparing to go underground to protect themselves.

And the signals do come from satellites to your brain.

This is a trojan horse- sold on the idea that this technology will make your life better.

So get off smart phones immediately.

These technologies are advancing so quickly. Everything I learned two months ago is already outdated.

Many weapons systems today were derived from the medical industry. This is double edge sword. Because if you know how to heal you also know how to destroy. People can be so evil. It’s hard to regulate evil.

This is all related to the New World Order. The security-surveillance state = more and more control; like the movie 1984.

From A 1973 government scientific document:

“Within the last two decades, a potential has emerged which was improbable but is now feasible. This potential is the technological ability is to influence directly the major portion of the approximately 6 billion brains of the human species without meditation through classical sensory modalities by generating neural information within a physical medium in which all members of the species are immersed.”

Here, they are talking about taking over everybody’s brain on earth using the earth’s magnetic layers. This quote is from Mindnetjournal.

“The most dangerous place in the world is under men’s hats.” 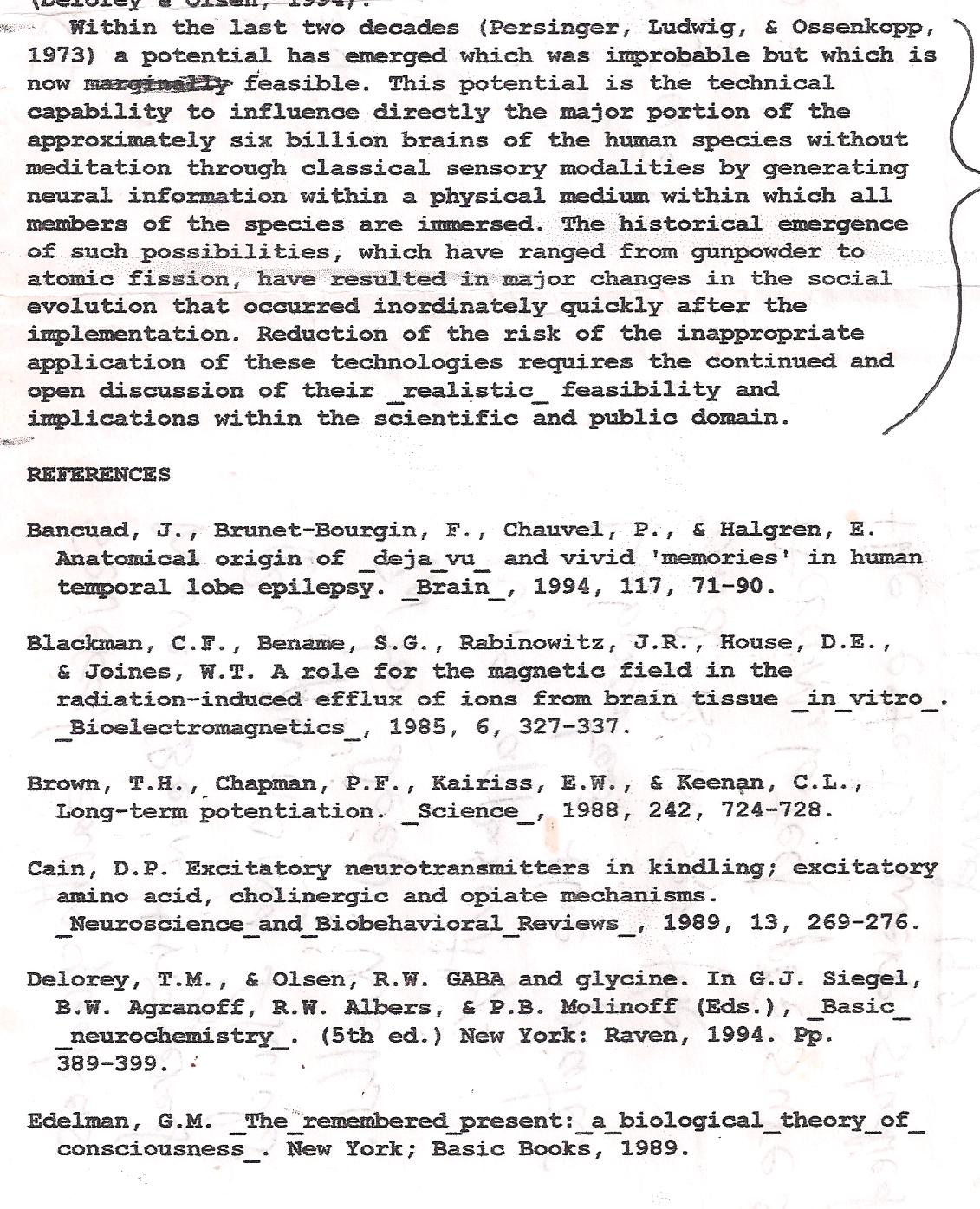 The goal of the targeting is to make target destroy their own lives. Satellites are involved. 80 to 90% of time, it is not the police or neighbor, it is long distance torture coming from satellites. They are tricking the perception of the TI. So don’t act out against anyone. They want you to act out.

Many gangstalkers (perps) are unwitting participants in this experiment. They are being used to disturb the TI. They are sent subliminal messages to do the street theater. Not everybody is participating willingly.

It is extremely expensive to develop countermeasures. It cost him $8,000 to develop anti-tinnitus CD.

Using these classified technology keeps perpetrators secret and out of the limelight.

There is no oversight- there are no laws protecting people’s mental privacy.

In my opinion, the CIA IS the government. They run many things. The government fears the CIA.

We’re all in danger.

They tried to kill me with sonic tinnitus. Everybody thought I had gone insane. They couldn’t hear the shrieking and ringing.

You to really have to have a strong constitution to survive the targeting. You have to be want to fight to the end.

We need to get laws passed to make this illegal. It is legal to read brainwaves from a long distance.

We need a 4th amendment for the brain, protection of our brains from searches and seizures.

They are using Coincidental Signals Intelligence.

Dr. Jose Delgado: Man does not have the right to develop his own brain…. One day whole armies and generals will be controlled by ESB.

In 1985, he went on TV and displayed a remote controlled bull he controlled electronically.

You have to listen to it every night all night for 3 weeks to break the RNM link.