“Should the practice of Spydom become universal farewell to all domestic confidence and happiness.” London Times, Christmas 1859

“I will splinter the CIA into a thousand pieces and scatter it into the wind.” –President John F. Kennedy, shortly before his assassination on Nov. 22, 1963

“It is the function of the CIA to keep the world unstable, and to propagandize the American people to hate, so we will let the establishment spend any amount of money on arms….” John Stockwell, Ex-CIA Station Chief and highest CIA employee to “go public”

“Abolish the CIA and Covert Action: The Organizing Committee demands the CIA and covert action be abolished not only because we recognize that the CIA serves only the multinational corporate empire, which is thoroughly antidemocratic and unAmerican, but also because the CIA ls a criminal organization and covert actions are criminal actions.” (From CounterSpy Volume 2, Issue 4, 1976)

“Intelligence operations have turned out to be a domestic war.” Maria Serna, Crusade For Justice (From CounterSpy Volume 3, Issue 1, 1976)

Introduction: “From 1973 to 1984, CounterSpy (The Quarterly Journal of the Organizing Committee of the Fifth Estate) published detailed, damning information about US covert activities (and, to a lesser extent, those of other countries, including Israel, Australia, and South Africa). It was most infamous for naming CIA station chiefs. The CIA loathed it and, it’s said, succeeded in undermining it. (In 1978 some of the people involved with CounterSpy created a similar magazine, CovertAction Information Bulletin, which then became CovertAction Quarterly and was published until 2005. It’s about to make a comeback; CovertAction Magazine launches this year.)

CIA has long collected copies of publications exposing its operations, and the CREST archive contains scanned photocopies of most issues of CounterSpy. (Printed copies are essentially impossible to find, even on the secondary/collectors’ market for rare books and magazines. Very few libraries have any copies.) Susan Maret dug through CREST and gathered every issue in there (21 out of the 32 that were published), then sent them along to AltGov2. I ran text recognition on them, so they’re now searchable. An additional six issues are from the Weisberg Collection at Hood College, Frederick, MD, USA.”

“CounterSpy Statement of Purpose: The United States emerged from World War II as the world’s dominant political and economic power. To conserve and enhance this power, the U.S. government created a variety of institutionas to secure dominance over “free world” nations which supply U.S. corporations with cheap labor, raw materials, and markets. A number of these institutions, some initially jointly with allied Western European governments, have systematically violated the fundamental rights and freedoms of people in this country and the world over. Prominent among these creations was the Central Intelligence Agency (CIA), born in 1947.,

Since 1973, CounterSpy magazine has exposed and analyzed such intervention in all its facets: covert CIA operations, U.S. interference in foreign labor movements, U.S. aid in creating foreign intelligence agencies, multinational corporations-intelligence agency link-ups, and World Bank assistance for counterinsurgency, to name but a few. Our view is that while CIA operations have been one of the most infamous forms of intervention, the CIA is but one strand in a complex web of interference and control.

Our motivation for publishing CounterSpy has been twofold:

-People in the U.S. have a right and need to know the scope and nature of their government’s abrogation of the U.S. and other citizens’ rights and liberties in order to defend themsellves and most effectively change the institutions.

-People in other countries, often denied access to information, can better protect their own rights and bring about necessary change when equipped with such information.”

(After being systematically confiscated, most issues of CounterSpy were declassified or “Approved for Release” in 2004 and 2010. However, many pages and sections have been “redacted” and 5 issues remain altogether missing.)

ETK Introductory Note: The information presented in these CounterSpy Magazine issues should be considered in the light of numerous other reliable sources, including L. Fletcher Prouty’s “The CIA and Its Allies in Control of the United States and the World” (1973), Douglas Valentine’s “The CIA As Organized Crime: How Covert Operations Corrupt America and the World” (2017), the books and lectures of ex-CIA Station Chief, John Stockwell (featured on this website), ex-CIA whistleblower, Phillip Agee’s “Inside the Company,” Dr. Collin A. Ross’s “Bluebird” and a host of other books, youtubes, websites, etc.

2) Counterspy Volume 2 Issue 1, 1974 CIA Target: Labor; Undercover Agents Profiled, The Military at Wounded Knee, The Ideology of Internal Security: “The Kent Committee for a Fifth Estate, at Kent State University in Ohio, recently uncovered the existence of a prototype “Master Plan” for political surveillance of campus groups and activists as well as private agreements on riot control assistance between 17 local police forces.”

4) CounterSpy Volume 2, issue 2, (full), 1975) CIA Chiefs of Station: Who Are They and What They Do, How the CIA Spies on Women, Exposing the CIA, CIA Labor Operations in Latin America

5) CounterSpy Volume 2, Issue 3, 1975 The AEL CIA Goes on Safari, The Last flight of the Phoenix Program, The Politics and Proliferation of Data Banks, Resources for Fighting Big Brother 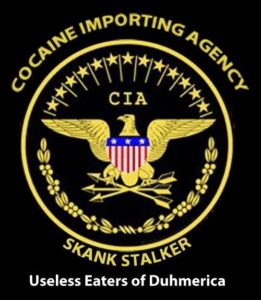