Home »The Controllers»Organizational Structure and M.O. of The Jewish “Kahal Of the Cahilla” (The Millenium Report, 2015)

The Kahal Of the Cahilla 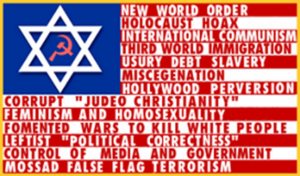 Webmaster’s Comment: A number of brilliant “targeted individuals,” including Dr. Rauni Kilde, Stephen O’Keefe, Gloria Naylor, and Kay Griggs, whose insights are featured on this website, have posited that “gangstalking” is primarily a Jewish cultural practice. Considerable information on this website supports that inference. Information on this website also demonstrates that Freemasons and the Scientology cult (which grew out of British and American intelligence agencies) have also long practiced this form of covert torture and murder. Whereas Masons refer to it as the “silent dagger,” “slow dagger,” and “secret dagger,” Scientologists refer to it as “fair game.”

We know from the research of Texe Marrs and others that Freemasonry is essentially a Judaic cult and, like Judaism, is devoted to the worship and service of Lucifer. We may also infer that Scientology has the same orientation at its core.

We may also speculate that this is the structure that underlies the “International Zionist Criminal Syndicate” (IZCS), Khazarian Mafia, “The Organization,” “The Firm,” “The Brotherhood,” etc.

Since I am not a part of this cult, I cannot attest to the accuracy of the following short article. However, I can say that if the following is correct, it definitely helps explain a lot of phenomena which otherwise are completely baffling. This inference is consistent with the conclusion I draw throughout this website that governments and governmental agencies serve a “Judeo-Masonic-satanic” elite. Hence, governmental programs carried out by agencies such as CIA, NSA, FBI, DHS, NATO, NASA, etc. would also somehow operate within the hierarchical structure outlined below.

Americans living in New York frequently hear of the Jews giving Cahilla parties in various city blocks, but that the Cahilla is a vast network of espionage and predatory activism for worldwide Jewry, and that it correlates the progress of the Jewish nationalists all over the earth, has only been authentically uncovered since the Boer War, mostly by British military and secret service agents.

There is no Jew of consequence in North America who is not involved in this terrible organization: terrible at least in its power for predatory control of Christian society ‑ or who is not listed somewhere down the line on the roster of its obedient adherents.*
(*Testimony of a Jewish Rabbi from New York, who has ask not to be named, and his wishes have been honored)

This entry was posted in Uncategorized. Bookmark the permalink.